The traditional house is a part of history and civilization identity, culture and community life Karo tribe. Architecture and ornaments on the walls of the house could describe it.

Geographically Linga Cultural Village is located at an altitude of about 1,200 meters above sea level, approximately 15 km from Berastagi and 5 km from the city Kabanjahe, capital of Karo.

Although only a village predominantly farmers, Lingga Cultural Village, became one of the tourist destinations in the Karo district frequented by local and foreign tourists.

In addition to beautiful nature, decorated expanse of fruit and vegetables plantation of green with views of Mount Sinabung, appeal stored in this village can still be found Karo traditional house hundreds of years old.

Formerly custom home Karo here still many standing. However, because of the legacy, by the heirs divided and eventually transformed into a regular house. partially again, condition  already damaged with age.

However, traces of traditional houses, as a symbol of civilization Karo tribe, still can be seen from the three ancient Karo traditional buildings are still standing strong. The third building, the traditional house (House Gerga) 12 Jabu (rooms), Home Striped Come and Sapo Ganjang which are located adjacent to each other. Concerned the old building is deformed or destroyed by age, Karo District Government finally set it as a cultural heritage, since 10 years ago.

Gerga house founded around 1860 and then by King Undo Sibayak Linga. Greater part of society call, 12 jabu which means inhabited by 12 families in it.

Not far from the traditional house Undo Sibayak Linga King, there are established Sinulingga Come Home Striped Ginger House and Beruna approximately 1862 children were inside inhabited for 8 families.

In addition there are old buildings named Sapo Ganjang, founded in 1870 is used as a storage space of deliberation and rice, but now by Sinulingga community on facebook enabled the Children’s Reading Garden. 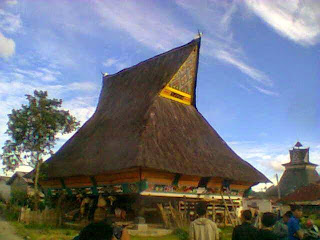 Among these three buildings, houses Linga King Undo Sibayak most widely visited tourist. In addition to the old age, this home tanpilan more riveting than others. It can be seen with various ornaments carvings adorn the walls of this house.

Each ornament contains a special meaning as a symbol of community wisdom Karo tribe and give the impression of grandeur and beauty.

Not much different from Belang Come Home, at the bottom of the house there is a pit that was used as cattle sheds and store firewood.

Another uniqueness of this house, it can be seen from the mast house, the walls are made of interlocking wood without using nails with only tied with rope fibers. It is said that in ancient times, the architect of the Karo tribe already has a durability Ability to design a house, for example, in palas between the foundation stone and wooden pillars supporting the house, coated stem fibers that point when the earthquake rocked, then the house will follow the direction of oscillation.

While in the house, which means there are 12 rooms, 1 family 1 room. Almost in front of every door available kitchen. One of the rooms here was inhabited by King Undo Sibayak Linga which is said to live polygamy.

Originally Gerga house is inhabited by 12 families, but now only inhabited one of the descendants of King Undo Sibayak Linga, Damson Tarigan and his wife, Januwarti Boru Sitepu (42), along with four of his children. Unfortunately, when visiting this house, only Januwarti visible.

“Abstinence if your house is empty because we are afraid broken created by termites. Pengawatnya smoke, so I do not use LPG cooking,” said Jawarita who was busy cooking for dinner supplies.

Not far from where she was sitting, there is a kind of wooden boxes made of wood called the composed three. The Ganjang used as fire wood storage area, the middle is used to store kitchen utensils and the hole is used for storing food such as fish, vegetables and so on.

Januwarti remember, most recently in October 2013 and then, a tourist from Holland had lived for three months and involved renovating this house. In addition, a citizen of the United States stayed for five days just looking specifically for wood, such as wood used in this house.

Not just only that, a foreign tourist has also expressed its intention to buy this house worth Rp 1 billion to be used as a private villa. “But we refused. This is our tradition. I have to defend it,” said Januwarti.

Besides frequented by tourists, Januwarti mention, school children, college students from the city of Medan where too often often stay here.